About 5000 BC, seal born in ancient Mesopotamia was transmitted to the small islands country of the Far East around 57 AD. Then even now, the habit has alived in there. But today, it is on the verge of extinction by digitization. This situation does not mean that Japan will loses one industry. Mankind will lose one culture.

Unlike nature, culture is created by humans. So culture can only be protected by humans. However, Japan have not enough power to protect this culture anymore. It is needed that your power which is interested in handicrafts and the history. After the Industrial Revolution, William Morris started the Arts & Crafts movement. I believe that new movement based on the IT / AI revolution will be happened like at that time.

I have not denied digital technologies. But culture must continue to alive while changing like our society which is also changing, I do not want that your descendants will say “If the people protected it at that time, we would……?” There is possibility yet. Let’s start developing the movement for the next generation together.

When I was learning arts in Tokyo, one Italian came to our university as an exchange student. He had been quite familiar with Japanese culture and he has learned a lot of things even after coming to Japan. He was seemed to be more Japanese than Japanese. One day we knew that his surname means ‘small mountain’ in Italian language. So our friend said “If you were a Japanese, your sirname is 小山 (Koyama)”. Since then, he have spent the time as Mr. Koyama.

It is the day came that he return to home. I gave a HANKO which had been written “Koyama” as a farewell gift. I wanted to shape the proof that he lived as Mr. Koyama. Besides, HANKO is small and light. Even if he has lots of luggage, he can store it in his pocket and return home, can’t he? 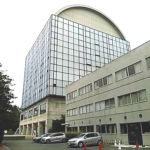 I was painting about religion. However, I am an informal religious painter, so my works couldn’t be formal. I was still satisfied, but also a bit sad about the fact. After graduating, a little thing happened. Then I started to learn HANKO making. One day a chance came to me that making a big *Goshuin with my senior craftsmen. The activity was dedicating to a shrine for the 1300th anniversary.
*Goshuin is a seal given to worshippers from Shrines or temples in Japan.

There have been people holding each wish for 1300 years. And many people will pray there for the future, too. It was really impressed that making intangible people’s hearts objects using own body. And it was the moment that my wish that shaping prays came true.
HANKO making is also. HANKO is used, when people hope in own future and decide. HANKO craftsmen hope the decision will lead to happiness, and carve name and prayer on a small surface. 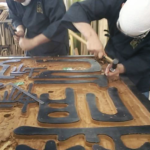 Maizuru is written as ‘舞鶴’. It means ‘dancing cranes’. In East Asia, crane is a symbols of longevity and are treated as auspicious birds. There is a town called Maizuru in Fukuoka City, Japan. My great-grandmother operated an inn in this place. SO from that fate, I named this place Maizuru-*Kobo.
The mark is arranged from the inn chapter. Originally it is imitating a family crest called ‘Tsurumaru’. I got the *Haori with the inn chapter as her memento, and I have worn it at the time of delivery my products.
*Kobo(工房) means atelier. / *Haori is a traditional Japanese dress using like cardigans. 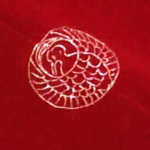 the inn chapter on the haori